“The only person
who cannot be helped
is the person
who blames others.”

You are the only person who’s going to sort out YOU. No one else can or even cares enough.
All psychotherapy is essentially self-help, and my job is to assist in the discovery of answers locked up within you. Of course, that will not happen so long as you insist upon targeting others as “The Problem.” If you focus on other peoples’ shortcomings, ruminate over ways they let you down, and fault them for the very things actually wrong inside your head, you will never come face-to-face with your true self. Projection leads to rejection and you’ll have few friends.
Sitting a few feet from Dr. William Glasser (Reality Therapy), I overheard him mutter: “Maybe a lot of what we label as ‘mental illness’ is just varying degrees of irresponsibility.”
Ask Adam why he did it and he’ll blame Eve. Ask Eve and she’ll blame the Serpent. I’m not sure who the Serpent blames. Probably God.

A school psychologist made note of first responses whenever he asked a kid: “Why did you do that?” You can probably guess the top three answers: “I don’t know;” “Because;” and “They did it, too!”
Blaming is always easier than taking responsibility. You don’t have to give up anything when clinging to delusions that have formed a shaky basis for your life.
It’s not your parents, spouse, friend or co-worker. Only you are responsible for each choice you make or fail to make.
And, by the way, you never look good casting someone else into a negative light. It only degrades you.
Admittedly, blaming someone else might help you escape embarrassment, as when you’re deep-down mortified by some stupid choice you’ve made. 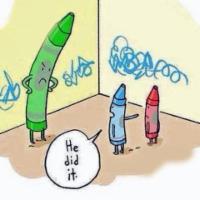 But what happens when you run out of people to blame?

This stuff feeds upon itself, like blaming the donuts when you get fat and then having to eat more donuts to reinforce your denial. By the way, the acronym D.E.N.I.A.L. stands for “Don’t Even Notice I Am Lying.” It’s not the donuts! You’re just playing “victim” in reaction to the very circumstances you have created.

It’s like being in the cab of a runaway steam locomotive, rocking back-and-forth and threatening to jump the tracks, while you’re shoveling more coal into the boiler and screaming “How do I stop this thing?”
There is one other habit even more self-defeating than blaming others — obsessively and unmercifully blaming yourself. Look into a mirror and meet the one person who will betray you the most. Your hard drive has become infected with malware and it’s time to clean up your registry and reboot. 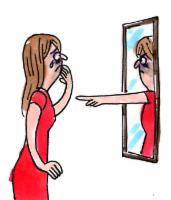 You can ruminate, regurgitate, rehash, and rethink repeatedly as regrets decompose in your brain, stink up your joy and turn you into a rotting corpse of remorse. No one wants to be near that. Bury it and move on. You are as happy or as miserable as you choose to be, and you owe yourself everything you expect from others.
Two construction workers took a mid-day break. One pulled from his lunch pail something wrapped in aluminum foil. “Just look at this! Look at this! Cheese sandwiches. That’s all I ever get is cheese sandwiches.” His buddy said: “Hey, man, why not ask your wife to fix something else?” He barked: “What wife? I fix these things myself!”